The cultural route „In the Podhale footsteps of Father Tischner”

The cultural route „In the Podhale footsteps of Father Tischner”

“I go to the mountains every week, my brother and I returned to Łopuszna, built a highlander-style house because I wanted to leave in this village some document for the building culture of the mountains. And that is why we have a highlander-style house, the carpenters, the logs as we may be the last generation which can afford to build a wooden house. Sometimes, I observe the knowledge of wood which the carpenters have. They treat wood as if it had a soul. And besides, in Kraków it is impossible to work, therefore, I am leaving for two, three days and I get immersed into a different world”.
This is what Rev. Józef Tischner wrote in “Panorama” in 1993. Józef Tischner (alias Wawrzek Chowaniec, Molinista, Józek Szkolny, Jegomość Józek) was born on 12 March 1931 in Stary Sącz, in the family of teachers. His father was the headmaster of the school in Łopuszna. During the war, the Tischner family left Łopuszna. Until 1942, they lived in Rogoźnik. In 1945, Tischner began his education at the lower secondary school in Nowy Targ where he received the diploma, so-called “duża matura”. In May 1950, he became a student at the Faculty of Theology of the Jagiellonian University in Kraków. On 6 June 1955, he was ordained to the priesthood by Bishop Franciszek Jop. In the years 1955-1957, he studied at the Faculty of Christian Philosophy of the Academy of Catholic Theology in Warsaw. After returning to Kraków, he continued his studies at the Faculty of History and Philosophy of the Jagiellonian University. At the same time, he worked as a vicar in the St. Nicholas parish in Chrzanów and in the St. Kazimierz parish in Kraków. In 1963, he obtained his doctorate at the Jagiellonian University and in 1974 he received his postdoctoral degree at the Academy of Catholic Theology. Since 1963, he taught philosophy at the Higher Theological Seminary, then at the Pontifical Faculty of Theology, and since 1981 – at the Pontifical Academy of Theology in Kraków. He was a highly respected retreat priest and lecturer. Since 1980, he taught philosophy of drama at the PWST National Academy of Theatre Arts in Kraków and at the Faculty of Philosophy of the Jagiellonian University. In 1981, he served as Dean at the Faculty of Philosophy of PAT and since 1985 he was Associate Professor of that university. He was a co-founder and president of the Institute for Human Sciences in Vienna. He is the author of many books, including the philosophical works: “The Philosophy of Drama”, “The Controversy over Human Existence” and a collection of sketches and essays: “The World of Human Hope”, “The Ethics of Solidarity”, „Tischner reads the Catechism”. A special place in his works is taken by the work referring to the tradition of highlander tales, written in the Podhale dialect in 1997 and entitled „The History of Philosophy, Highlander Style”. Tischner gained popularity thanks to TV and radio shows. In the 1970s, he became a famous figure in the Polish intellectual life. In the last years of his life, he developed laryngeal cancer. He died on 28 June 2000 in Kraków and was buried on 2 July in Łopuszna. Since 2001, the monthly and Publishing House “Znak” has been awarding the Józef Tischner Award. Since 2003, the Viennese Institute for Human Sciences has been granting Józef Tischner scholarships for young Polish scientists. In 2003, the „Józef Tischner Institute” Foundation was established, whose purpose is to protect and disseminate the intellectual achievements of its Patron and to continue creatively the most important motives of his philosophy. The monuments are the schools, hospices named after Him. He is the patron of Social Primary School No 1 in Tarnów, which was the first to adopt His name on 10 March 2001. We dedicate this guide to the great thinker, wonderful priest, man with a big heart, gifted with remarkable charisma, understanding for human weaknesses, with the outstanding sense of humour. Anyone who remembers Rev. Józef Tischner, had the opportunity to meet Him, reads His books or walks the same mountain routes, will have a chance to take a nostalgic journey to the places with which Józef Tischner was linked. The cultural route „In the Podhale footsteps of Father Tischner” is marked out by the plaques, located in the villages described below.
Author: Comarch 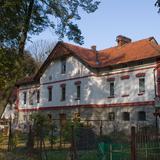